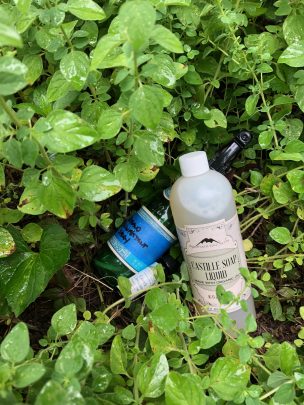 Here are some facts on the power of Oregano oil from Dr. Mercola:

Writing in the international journal LWT — Food Science and Technology,10 researchers published results of a study demonstrating the effectiveness of oregano essential oil in the removal of young and mature S. aureus biofilms. Staphylococcus is an underlying pathogen in many instances of food poisoning around the world. This study highlighted the potential for oregano essential oil and carvacrol, a compound found in oregano oil, to reduce the number of cells sticking to food preparation surfaces.11
In the study, oregano oil performed more effectively than sodium hypochlorite, a conventional means of removing bacteria from stainless steel surfaces used in the food industry. Unlike sodium hypochlorite, oregano oil does not cause corrosive damage to surfaces.
The study supports the results of previous research demonstrating the antimicrobial activity of oregano essential oil. In one study the oregano oil was the most effective against E. coli12 and in another was highly effective against salmonella in washing organic leafy greens.13
In a paper published in Emerald Insight, researchers from Brazil demonstrated oregano oil had antibacterial activity against microorganisms responsible for food spoilage, except pseudomonas.14 Oregano essential oil is also the subject of studies by the swine industry, as its components have demonstrated the ability to permeate and depolarize bacterial membranes, resulting in pathogen cell death.
Research done at Iowa State University looked at common livestock pathogens and the ability of oregano essential oils to protect against inflammatory damage. The researchers found it was a safe and accepted feed ingredient with potent activity against gram-negative and gram-positive bacteria.15
In another study,16 researchers discovered that, in gaseous form, 14 essential oils had strong antimicrobial activity against bacteria known to cause food poisoning and upper respiratory infections. These bacteria included E. coli, S. aureus, S. pneumoniae, S. pyogenes and H. influenzae.
The gaseous form of essential oils were most effective against H. influenzae and least effective against E. coli, but exhibited some degree of antimicrobial activity against all.17 In each of these studies researchers used oil of oregano from the true oregano plant and not common oregano marjoram found in your kitchen cabinet.

Each pound of medicinal grade oregano oil is the product of over 1,000 pounds of wild oregano.22 Oregano oil has demonstrated antibacterial effects on human tissue as well as on your kitchen counters.
In a study published in the Journal of Medicinal Food, researchers found oregano oil was effective against three gram-negative (E. coli, Salmonella typhimurium, Pseudomonas aeruginosa) and two gram-positive (S. aureus, Bacillus subtilis) bacteria.23 Another study found the oil to be effective against parasites and even some cancer cells.24

In a paper published in Pathogens and Disease, researchers found oregano oil was an effective adjunct to antibiotics in fighting multiple drug-resistant E. coli.25 Yeast infections resistant to the antifungal drug Diflucan responded to the use of oregano oil.26 The oil has also demonstrated effectiveness against the deadly superbug, methicillin-resistant Staphylococcus aureus (MRSA) infections.27
Urinary tract infections,32 respiratory infections33 and parasitic infections34 all respond to treatment with medicinal strength oil of oregano, even when the infection is resistant to pharmaceutical antibiotics.

The health benefits of oregano essential oil may be attributed to high levels of antioxidants and the oil’s antiviral, antibiotic, antifungal and anti-inflammatory properties.35